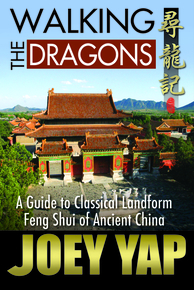 A Travelogue from a Feng Shui Perspective

With the release of this insightful travel account, Joey Yap establishes a platform to share with reader the one-of-a-kind experience of his annual China Excursion Series. With a generous insight into the mysterious and captivating world of ancient China, where the practice of Feng Shui was as integral to daily life as the use of technology is today. A step back into time, from a Feng Shui perspective.

What You`ll Learn
Imperial tombs and burial spots and how it affected the descendants of the generations that followed.
Majestic mountains and natural formations and the temples built on those locations.
Tombs of past political leaders of China, as well as those of important philosophers and Feng Shui grandmasters.
A look into how Yin House Feng Shui was applied in ancient times.

Chapter One: On The Trails of Dynasties & Emperors
A visit to the tombs of past Emperors where the Feng Shui and landforms of these final resting places are evaluated.

Chapter Two: The Last Dynasty
Explore the intricate structures of some of the most iconic constructions in ancient China. This includes, of course, a humble visit to The Forbidden City in Beijing.

Chapter Five: Chasing Spirituality
Millions of Buddhist temples in China, but only four integral religious structures are zoomed in for study.

Chapter Eight: Tibet
Join the excursion as they trek through Tibet in an insightful journey to Potala Palace, Drepung Monastery and Na Mu Cuo.