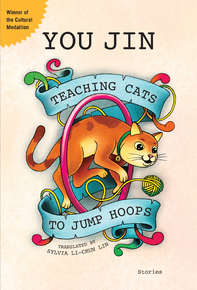 A chain-smoking student with a violent past. A girl with a weakness for rare turtles. A boy who sees a raging fire each time he opens his exam booklet. In this collection of funny and heartwarming stories by You Jin, a teacher finds herself confronted with misfits and loners, rebellious dropouts and overbearing, even abusive parents. Yet she remains determined to reach out to her students. Combining an assured style with sensitive portrayals, Teaching Cats to Jump Hoops is the first translation into English of a popular voice in Chinese literature.

Tham Yew Chin (1950, Ipoh, Malaya), better known by her pseudonym You Jin, is a well-known local Chinese language writer. A prolific writer, Tham has written numerous short stories, novels, travelogues, essays and opinion pieces, some of which have been translated to other languages. Her works have been published not only in Singapore, but also in China, Taiwan, Hong Kong and Malaysia. For her contributions to the literary scene, she was awarded the Cultural Medallion for Literature in 2009.