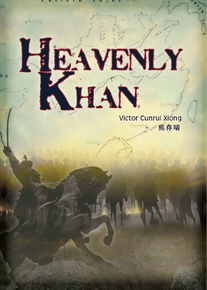 This historical fiction is based on the true story of Li Shimin (also known as Tang Taizong), the greatest sovereign in Chinese history. About 30 years younger than Muhammad, he grew up in a world of devastating upheaval that tore China asunder and was thrust into the role of a military commander in his father’s rebel army while still a teenager. In the process of vanquishing his enemies on the battlefield, he proved himself to be a great military genius. As emperor he encouraged critical suggestions by his court officials, which he often adopted, and lent support to the religions of his day, notably, Buddhism, Daoism, and Christianity. The international prestige he had won for Tang China was so high that the states of Central and North Asia honored him with the title of “Heavenly Khan.” Although his father founded the dynasty, it was his reign that laid the groundwork for a brilliant empire that was to endure for centuries.