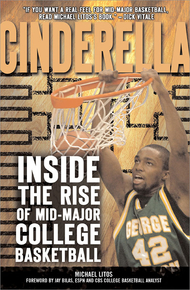 The NCAA tournament has always been an enormous spotlight for the underdog. Bracket-clenching fans root for teams from smaller schools to upset the elite squads and score an unexpected win on their tournament sheet...if they picked them, that is. And normally that's all the fans expect-one or two incredible upsets. But in 2006, the underdogs broke through...Cinderella is an inside look at the NCAA's mid-major basketball programs, which fight for one shot to battle the elite teams for the national championship. The rise of mid-majors has been one of the most thrilling sport stories of the past few years, and it's only getting bigger. Michael Litos spent the 2005-06 season on the frontlines of the Colonial Athletic Association, home of such mid-major standouts as Old Dominion, Hofstra, and George Mason. With complete access to coaches and players, he found incredible tales of pressure and passion. He saw coaches and players struggling to put together a championship drive in spite of uncompromising schedules and half-filled arenas. And he was there when the ultimate underdog turned the world of college basketball upside-down-George Mason's historic run to the Final Four.In what was dubbed The Year of the Mid-major, Cinderella delivers the ultimate look at what it means to be an underdog, and how the sport of college basketball is being transformed. In the last great league of amateur athletes, this is the story those who play for the love of the game...and the thrill of achieving the unbelieveable