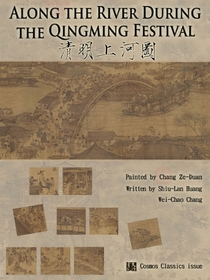 The Along the River During the Qingming Festival was painted by Chang Ze-Duan of North Song Dynasty on silk. Painted in light colors, it is 528cm wide and 24.8cm tall. Qingming implies Qingming Festival or Tomb Sweeping Festival. “Shang He” (above the river) was a norm at that time. After worshipping the ancestors and sweeping their tombs, people would get on the bridge to enjoy the view of Bianjing and River Bian. Or they may wander along the bridge and buy snacks from the vendors there and visit the riverside towns. This is what “Qingming Shang He” means. In the painting, we can see many of the norms of Qingming Festival, such as the pasted paper building miniatures in front of the “Wang’s Paper Horse Shop,” the tomb sweeping team with sedan chairs decorated with willow branches and flowers outside the city, the vendors selling mud figurines at the entrances of the bridge, the people gathering and drinking after tomb sweeping, and more. These scenes are similar to the descriptions of The Eastern Capital: A Dream of Splendor. In short, it is a masterpiece of social norms painting completed in the Song Dynasty.
Although Along the River During the Qingming Festival is not the only painting that portrays the capital in Chinese history, it is the most complete painting that captures the social norms and characters of Bianjing in art history. From the illustrations, deconstructive interpretations, and plain and simple introduction of this book, readers can have a glimpse of the authentic picture of Bianjing during the North Song Dynasty. Reminiscing the past, Cosmos Classics has edited and released Along the River During the Qingming Festival by Chang Ze-Duan, a North Song Dynasty painter, in electronic book format. It is hoped that Chinese of this generation can converse with tradition to fuse the ancient with the modern. Reading the classics, we may be inspired to lay down milestones for modern arts. In addition, we are enthusiastic to share them globally to allow international people to immerse themselves in the beauty of Chinese arts.

Shiu-Lan (Jully) Huang
After working in the legal sector for many years, Jully had the feeling that the conflicts in humanity and karma for the people’s trials in the courts did not allow her to find the ultimate answer for life within the sphere of law and order. Then she began to learn Zen, study I Ching, and practice Buddhism with her foundation in literature and history. She deeply felt that Chinese people tradition thoughts of Confucianism, Buddhism and Taoism can provide an outlet for people living in the society of the 21st century. Therefore, she engaged in the modernization works of traditional Chinese classics by constructing the internet platform of Cosmos Classics to cultivate the field of the classics in a profound manner. Exploring masterpieces of great artists and writers, she plans to publish Chinese classics.