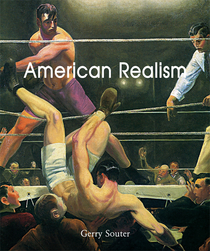 Urban realism, snow-covered streets of New York, boxing matches, children on the banks of a river, the painters of the Ash Can School preferred realistic images. Their paintings are a true hymn to noise and sensations. This unconventional movement enabled the birth of a true national artistic identity which broke free from the establishment. The Ash Can School resolutely promoted the affirmation of the modernist current of American art. Edward Hopper, who was a student of Robert Henri, embraced the principles of this movement and brought them to another level.