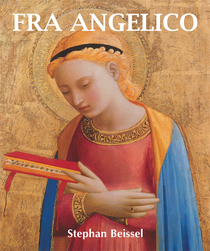 Secluded within cloister walls, a painter and a monk, and brother of the order of the Dominicans, Angelico devoted his life to religious paintings. Little is known of his early life except that he was born at Vicchio, in the broad fertile valley of the Mugello, not far from Florence, that his name was Guido de Pietro, and that he passed his youth in Florence, probably in some bottegha, for at twenty he was recognised as a painter. In 1418 he entered in a Dominican convent in Fiesole with his brother. They were welcomed by the monks and, after a year’s novitiate, admitted to the brotherhood, Guido taking the name by which he was known for the rest of his life, Fra Giovanni da Fiesole; for the title of Angelico, the “Angel,” or Il Beato, “The Blessed,” was conferred on him after his death. Henceforth he became an example of two personalities in one man: he was all in all a painter, but also a devout monk; his subjects were always religious ones and represented in a deeply religious spirit, yet his devotion as a monk was no greater than his absorption as an artist. Consequently, though his life was secluded within the walls of the monastery, he kept in touch with the art movements of his time and continually developed as a painter. His early work shows that he had learned of the illuminators who inherited the Byzantine traditions, and had been affected by the simple religious feeling of Giotto’s work. Also influenced by Lorenzo Monaco and the Sienese School, he painted under the patronage of Cosimo de Medici. Then he began to learn of that brilliant band of sculptors and architects who were enriching Florence by their genius. Ghiberti was executing his pictures in bronze upon the doors of the Baptistery; Donatello, his famous statue of St. George and the dancing children around the organ-gallery in the Cathedral; and Luca della Robbia was at work upon his frieze of children, singing, dancing and playing upon instruments. Moreover, Masaccio had revealed the dignity of form in painting. Through these artists the beauty of the human form and of its life and movement was being manifested to the Florentines and to the other cities. Angelico caught the enthusiasm and gave increasing reality of life and movement to his figures.