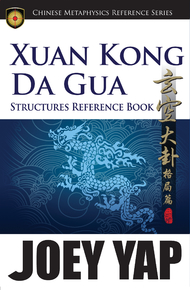 Invaluable asset to serious Feng Shui enthusiasts
This handy guide compiles all the most frequently-occurring structures within the Xuan Kong Da Gua system for easy reference by teachers, students and practitioners. Derived from the renowned classical text - Di Li Bian Zhen (Earth Study Discern Truth) - the structures are presented in an easy-to-understand bilingual format, with all key terms accessible in both Chinese and English.

Part D: Xuan Kong Structures
A study of Xuan Kong would be incomplete without the crucial assessment of the Structures.

Part F: 64 Hexagrams Gold Division Analysis
The dispositions of each Hexagram are examined to determine their indications.