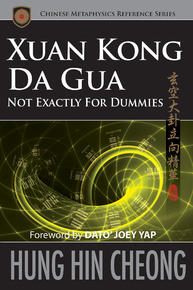 A Deeper Look into the Broad Xuan Kong Classification

This book consists of extensive research in the field of Xuan Kong Da Gua, which is different from the module of Xuan Kong Flying Stars. Through extensive research, this book tempers theoretical ideals with practical limitations. The author reveals certain privileged information that other Fengshui schools choose to keep secret. Information that is capable of changing the landscape of Chinese Metaphysics of the 21st Century.

Chapter Two: Setting Up XKDG Fengshui
A study of landforms and Qi management that resonate well with specific Gua Elements and Period Stars.

Chapter Four: ‘Out-of-Gua’
A look into ‘Out-of-Gua’ Trigrams and their relationship with the Elements as well as corresponding landforms.

Chapter Five: Triangulation
This chapter puts under the microscope a verse from the classic ‘Green Satchel Oracles’ and relates it back to XKDG.

Chapter Six: Personalization
Discover the meaning of Heaven, Earth and Man in XKDG as well as the influence of Hexagrams in personal BaZi charts.