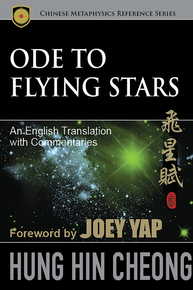 Closing the transliteration series of the Four Celebrated Poems of Xuan Kong is the Ode To Flying Stars, a translation of the much-discussed but yet arcane classical text of Flying Stars. An essential addition to the library of determined Feng Shui practitioners and students everywhere, this book presents knowledge in Xuan Kong Feng Shui in levels you never dreamt of before.

What You`ll Learn
A more thorough understanding on the subject of Trigram imagery, which is the focus of Flying Stars
A refreshing take on studies and practice of Xuan Kong, as it reveals its heavy usage of Trigram imagery
Understand the interesting anecdotes to impart snippets of information on the cultural background against which the poem was written
An important reference material for anybody who wants to take their Xuan Kong Feng Shui studies to the next level

Chapter One: Preamble
An introduction to the fundamental precept of Xuan Kong Flying Stars.

Chapter Two: Star Conjunctions
This chapter invokes the name of a Hexagram to describe a Star conjunction.

Chapter Three: Health Issues
The reflection of a Star or Trigram over the malfunction of the associated body parts revealed.

Chapter Four: Landforms
Understanding the key concepts of landform could reward you in your study and application.

Chapter Five: Miscellaneous
Get behind the ambiguous bit of the original text in this section.

Chapter Six: Timing
A study on the topic of timeliness - its importance and true meaning.